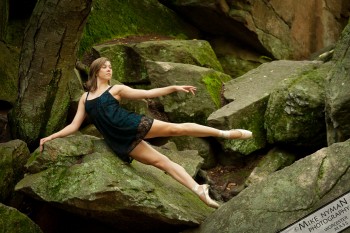 Before DitP: Erin at Purgatory Chasm

The idea for Dancers in the Parks came from the mixing of two streams of photographic interest. The largest part of my photo business is taking portraits for local dance studios and dance companies, which started in 2003 when my oldest daughter began dance in kindergarten. I happened to be in the studio waiting room when I overheard the owner and office administrator talking about offering portrait sessions for the first time in celebration of their studio’s ten year anniversary. I was mainly doing wedding and senior portraits at that time, so I offered to give it a try, and my love for dance photography began. I now consider it one of my duties in life to rid the world of pastel muslin backgrounds one dance studio at a time.

The second stream is my love for helping people look with fresh eyes at the common places around them–those things that because of their familiarity and proximity become invisible. In 2006 I worked on a personal project called Day in the Life of Worcester, where I daily posted a photograph of what I found interesting in Worcester County. As a Worcester transplant, I attempted to show the natives that Worcester was a better place to live than they may have thought.

From these two streams came the idea to help people see the many green spaces in Worcester by adding an element of grace and beauty to scenes that are too often overlooked. I strongly believe in the importance of urban green spaces and environmental justice (see Why Urban Parks Matter), and this is my small attempt at shining light in a creative way.

I am grateful to Erin Stomski for her invaluable assistance on this project pushing it to the next level of professionalism, to the dancers who have come out of the woodwork (out of the internet, actually!) to volunteer their skills, and to Emily Stomski for her video work and extra eyes.

This site uses Akismet to reduce spam. Learn how your comment data is processed.